I’m pleased to tell you that an article I wrote for the Wessex Scene has been published in their February issue. I have written articles for the Scene online before but this is the first I’ve had in print. Unfortunately as it was edited down to fit a the page some sentence concatenation has lead to some inaccuracies, but otherwise I’m pleased! (And the Yorkshire town is of course Settle not Seattle) Below is an image of how it appeared in print and the text follows so you don’t need to squint at the image. I like the layout and the image by Tara Shore. 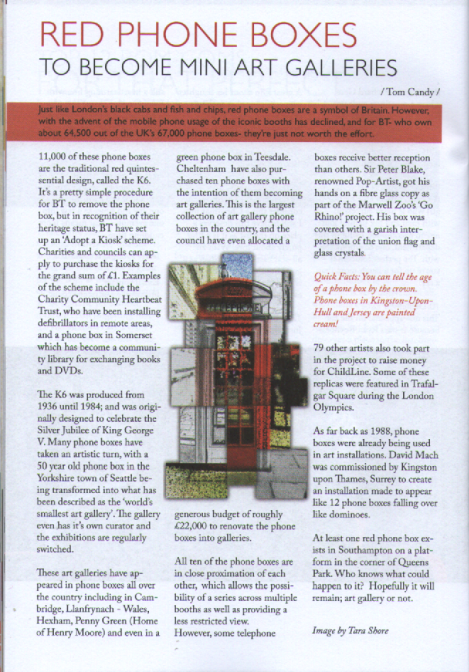 Just like London’s black cabs and fish and chips, red phone boxes are a symbol of Britain. However, with the advent of the mobile phone usage of the iconic booths has declined, and for BT- who own about 64,500 out of the UK’s 67,000 phone boxes- they’re just not worth the effort.

11,000 of these phone boxes are the traditional red quintessential design, called the K6. It’s a pretty simple procedure for BT to remove the phone box, but in recognition of their heritage status, BT have set up an ‘Adopt a Kiosk’ scheme. Charities and councils can apply to purchase the kiosks for the grand sum of £1. Examples of the scheme include the Charity Community Heartbeat Trust, who have been installing defibrillators in remote areas, and a phone box in Somerset which has become a community library for exchanging books and DVDs.

The K6 was produced from 1936 until 1984; and was originally designed to celebrate the Silver Jubilee of King George V. Many phone boxes have taken an artistic turn, with a 50 year old phone box in the Yorkshire town of Seattle being transformed into what has been described as the ‘world’s smallest art gallery’. The gallery even has it’s own curator and the exhibitions are regularly switched.

These art galleries have appeared in phone boxes all over the country including in Cambridge, Llanfrynach – Wales, Hexham, Penny Green (Home of Henry Moore) and even in a green phone box in Teesdale.

Cheltenham  have also purchased ten phone boxes with the intention of them becoming art galleries. This is the largest collection of art gallery phone boxes in the country, and the council have even allocated a generous budget of roughly £22,000 to renovate the phone boxes into galleries.

All ten of the phone boxes are in close proximation of each other,  which allows the possibility of a series across multiple booths as well as providing a less restricted view.

However, some telephone boxes receive better reception than others. Sir Peter Blake, renowned Pop-Artist, got his hands on a fibre glass copy as part of the Marwell Zoo’s ‘Go Rhino!’ project. His box was covered with a garish interpretation of the union flag and glass crystals.

[quote align=”left” name=”” role=””]Quick Facts: You can tell the age of a phone box by the crown. Phone boxes in Kingston-Upon-Hull and Jersey are painted cream![/quote]

79 other artists also took part in the project to raise money for ChildLine. Some of these replicas were featured in Trafalgar Square during the London Olympics.

As far back as 1988, phone boxes were already being used in art installations. David Mach was commissioned by Kingston upon Thames, Surrey to create an installation made to appear like 12 phone boxes falling over like dominoes.

At least one red phone box exists in Southampton on a platform in the corner of Queens Park. Who knows what could happen to it?  Hopefully it will remain; art gallery or not.

You can follow me here on WordPress or on Facebook . Checkout the rest of my posts using the categories on the left.