Scottish independence is big news at the moment in the UK. The United Kingdom is made up of England, Scotland, Wales and Northern Ireland, it’s flag (above) was designed to include the Scottish, English and Irish flags (Above, right). In September next year Scotland will hold a Referendum as to whether to become an independent country. Personally I’d like to see the United Kingdom remain united.However, without getting into politics, the potential split raised questions about changes to the flag. It is actually unlikely to change since Scotland will still retain British Monarchy but people have been sparked into creating some wonderful flags. Here is my Top 5. (2 & 1 are spectacular)

I start with a very subtle change by Dave Parker. It replaces the blue of Scotland with Wales’ green as the Welsh flag is currently unrepresented. 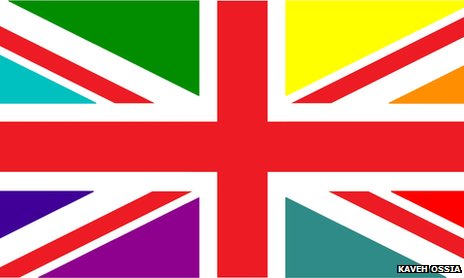 Kaveh Ossia recoloured the current Union Flag with all colours of the rainbow. An interesting choice but unlikely to ever represent a country that wants to be taken seriously. 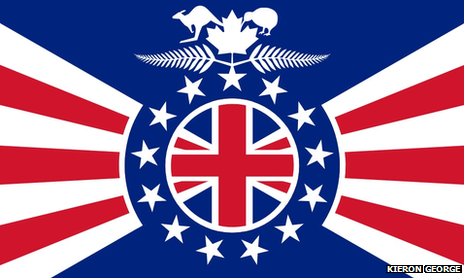 As I said these top 2 are absolutely fantastic. I can already imagine this inspiring design by Kieron George flying from houses and being warmly accepted with patriotism. Mt only criticisms would be that I can also easily imagine the flag flying heroicly from tanks and emblazoned on planes during the two world wars,  also notice the kangaroo and kiwi not quite fitting above the maple leaf. This seems to be a war flag yet still appealing enough that I wouldn’t oppose it replacing the Union Flag

John Yates dreamt up this beautifully angular flag. The vertical and horizontal lines off centre seem to want to clash with the diagonal, but they’ve been played, with the pushy yellow and black, just right to sweep your eye around in a clock wise direction. It’s another flag I’d associate with a great victory in battle, but perhaps that is the real aim of a flag and this time the it’s a chivalrous bard that I imagine flying the colours. Long enough ago to become legend or myth. The UK has a fantastic history and this flag seems to shout it out!

If you want to send me a design I’ll feature it below. The US also has a number of designs ready for when it accepts it’s 51st State, look out for my top 5 on this soon.

This design below by Martyn Potter is also worthy of a mention. It is a nice idea, unfortunately the regular shape of a flag means it has a lot of plain red space.

Liam Roberts’ design works similar to that of No. 3 I choose not to include it because of the similarity but again it’s worthy of a mention.

Any designs you send will feature here: